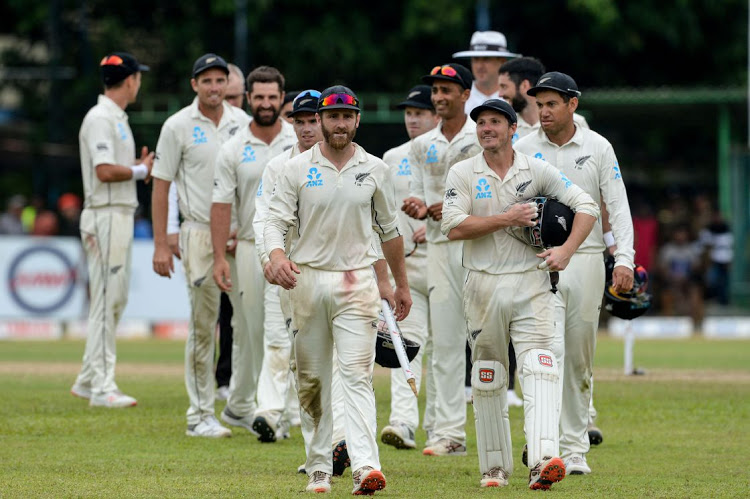 New Zealand held their nerve to clinch a hard-fought and comprehensive victory against Sri Lanka in fading light in the second Test on Monday and level the two-match series 1-1.

The victory was achieved with an hour left on day five when Lasith Embuldeniya edged a short delivery from Trent Boult to Kane Williamson at gully.

Sri Lanka were bowled out for 122 runs after New Zealand declared their second innings on 431/6 with a first-innings lead of 185. The game went to the last hour of day five at Colombo’s P Sara Oval, and though 19.4 overs remained when tailender Embuldeniya was the last man dismissed, umpires could have called off play at any time with the lightfast deteriorating.

New Zealand’s bowlers were hurrying through their deliveries knowing that they were racing against time. The first four days’ play had been severely affected by rain, wet ground conditions and bad light, but surprisingly the final day stayed clear after a 30-minute delayed start.

Sri Lanka had given away the initiative to New Zealand after losing five wickets for 32 runs before lunch, but a terrific fightback by wicketkeeper Niroshan Dickwella kept alive their hopes of salvaging a draw.

Dickwella, who was unable to keep wicket after a cut on his left little finger, showed plenty of character during a 51-run knock that lasted for three-and-a-half hours. It was his 13th half-century in Test cricket.

There was little support from rest of Sri Lanka’s batsmen, with skipper Dimuth Karunaratne’s 21 the second-highest score.

Suranga Lakmal and Dickwella batted for over an hour, but the stand was broken when Lakmal gloved one to close-in fielder Tom Latham after tea. Sri Lanka were still counting on Dickwella when he fell for his famous sweep shot.

The 26-year-old relies heavily on the shot to score his runs, but on this occasion, he had stayed away from taking undue risks.

Ajaz Patel switched ends and came on from the Air Force Flats side, and as Dickwella shaped to play the sweep shot, Latham at short leg moved to his left and positioned himself in the perfect place to snap up the chance.

Dickwella could hardly believe his luck before walking off dejected. Latham’s close-in fielding was brilliant and so was his batting, particularly his battles with Sri Lankan spinners.

The opening batsman was named man of the match for his 154, a seven-hour vigil in which he faced 251 deliveries and was involved in two hundred-plus run stands.